What is the Average Truck Accident Settlement Amount? 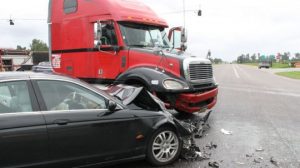 If you’re involved in an accident between two passenger vehicles, damage and injuries can be serious. Add a commercial truck hauling tons of cargo into the mix and results are often severe and tragic.

Commercial vehicle settlements tend to reflect this in larger dollar amounts. But if you or a loved one has been in a truck accident there is a lot more to know than simply bigger vehicle bigger settlement. In the following, we’ll discuss in detail…

How Much Can I Recover From a Truck Accident?

Let’s assume that fault is cut and dried (it’s not yours), and despite the terrible reality of many truck accidents you’re wondering how much you can expect to receive in damages.

Anyone who tells you they can give a specific answer to this question is probably misleading you.

There are a few common economic categories that can help you get an idea of the total value of your semi-truck claim. These are:

Drilling in even deeper to the dynamics of truck accident settlements, let’s take a look at a few other factors that are going to affect settlement amounts. Here are four primary ones:

It can also lead you to being barred any compensation from the other party’s insurance company unless you can demonstrate they are 51% or more at fault. Step one is figuring out how state laws may affect your claim, oftentimes an attorney is needed for this.

Be prepared, though, the opposition may try to dig into your medical history to find preexisting conditions or outright dispute your medical claims.

This may sound like a lot but if you consider the more severe accidents, it isn’t. Be aware that a truck may be covered by more than one policy and unearthing all coverage can be a bit of a process. How this plays out is, of course, subject to state a federal regulation. If you’re finding yourself confused an attorney can help you clear things up.

Another way to try to get a feel for how much your truck accident settlement will be is to review some real cases and their results.

A driver was the victim of a distracted semi-truck on I-20 in Florida. He sustained neck and back injuries, along with a closed head injury. A settlement offer was reached after negotiations in the amount of $183,215

A woman was driving her car when she got into a trucking accident on Highway 101 in California. She suffered severe head injuries. The trucking company was found at fault because the accident occurred at night and the truck did not have adequate reflectors. Due to the seriousness of the head injury and fault of the trucking company, the truck accident settlement of $600,000 was reached.

An 18 wheeler truck in Texas crashed with a passenger vehicle when during heavy rain it slid across multiple lanes. The driver of the vehicle suffered several fractures to her arms and legs. One of the arms was also nearly amputated. The driver received a truck settlement amount of over $2,000,000.

The truth is that money will never be enough to compensate for a debilitating injury or the loss of a loved one, but that doesn’t mean that you should not pursue a fair settlement.

Truck accident claims and settlements are unique. Trucking companies/insurance carriers are prepared to defend themselves and often employ tactics to reduce what they pay out. Keep the following in mind, and if in doubt seek legal counsel.

From What is the Average Truck Accident Settlement Amount? to What is My Pain and Suffering Worth?

From average semi truck settlement to Pain and Suffering Home